One of the most picturesque and most romantic gorges in Serbia is located west of Cacak, between the mountains of Ovcar (986 m) and Kablar (885 m).

Waters of the River Zapadna Morava have burrowed, within the period of hundreds of thousands of years, steep banks of breath-taking beauty. This natural splendour has been perfected, in recent history, by the creation of two artificial lakes – Ovcar and Medjuvrsje.

In this charming natural surrounding, at the foot of the Mt. Kablar upstream the river, half-way between Cacak and Pozega, in the central part of the Gorge, 18 km from Cacak and 162 Ion from Belgrade, nests the Ovcar Spa.

This balneological centre has had a long tradition. There are indications that the mineral waters of this Spa had been used even in prehistoric times and that the pagans assembled around its springs that represented cult spots, performing religious rites; ancient Romans, who exploited the neighbouring mines, also used these thermal springs.

Later on, the Christians built churches and premises for housing of the guests. Ovcar Spa thermal springs were then used by the Turks;
in feudal times, this was the most significant monastery spa in Serbia. Owing to the fact that, upon liberation from the Turkish rule, its hot mineral waters were used by the neighbouring monasteries (it had been a monastery spa by the 19th century) especially by Blagovestenje (Annunciation) Monastery, it used to be called Blagovestenska Spa. 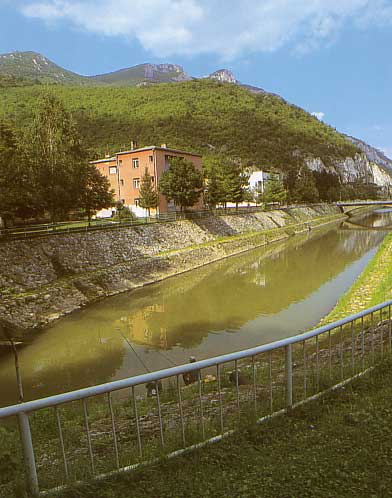 It is mostly used for treating of rheumatic ailments, by bathing in bath tubs and indoor swimming pools. (The Spa also has an outdoor thermal water pool). Medical staff from Cacak Health Centre – the unit stationed in Ovcar Spa – is in charge of the patients’ health. Moderate-continental climate – the Spa is located at the altitude of 279 m – and the air, free from any kind of pollution, contribute to the pleasant sojourn of the healthy guests to the Spa, as well.

Dense mountain forests are abundant in all kinds of game, while there Is plenty of fish in the brooks streaming down the slopes of Ovcar and Kablar, and in the Zapadna Morava and two lakes. The stay in Ovcar Spa can be supplement-ed by hunting or fishing, mountaineering and kayak rowing and by other water sports.

Almost nowhere else, in such a small area (Ovcar-Kablar Gorge) were so many monasteries built (16th – 19th centuries) – according to some statements even 25 of them, but only ten of them still endure there. The visitors to the Spa have a unique opportunity to see them and get acquainted with their history, their treasuries, and with Serbian spirituality and tradition. (In the immediate vicinity of Ovcar Spa, there are two monasteries – Blagovestenje (Annunciation) and St. Trojica (the Holy Trinity).

Guests visiting the Spa in the middle of August, can attend the biggest celebration of folkways in Serbia – the Trumpet Players Get-Together, which has taken place in Guca, the nearby village, for four decades now. (A unique museum of wayside tombstones is also located in Guca).